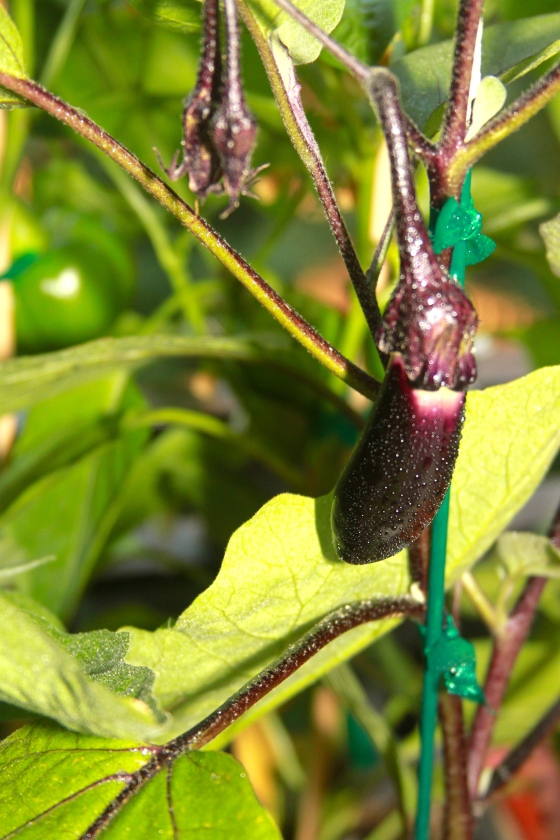 Despite the serious space limitations of our NYC studio apartment, our eggplants are fruiting!

It’s not done yet. Ees just a little baby now. A thumb-sized baby eggplant… That one day will be dinner.

We lost some eggplant flowers – probably normal given the crowding, but I’m no eggplant-expert – but they’ve made a lovely centerpiece!

In other news, this week in our share we got:

Eggplant looms large in our legend. On my first date with my honey – a story I’ve been forced to tell three times alone this week – I fainted head first into my

eggplant parm for no apparent reason. The entire fire department piled into the tiniest Italian restaurant you’ve ever seen, followed by an ambulance squad, a whole pack of hysterical waiters, and my poor boy had a minor heart attack. (We’ve both recovered, by the way.) So when our dubious friend the eggplant arrived in our CSA share this weekend, we were skeptical… and also, very excited.

Because of its unique texture, eggplant is highly maleable and open to a lot of recipes that other vegetables would crumble in the face of. And so we eat eggplant. Like, a lot of eggplant. Eggplant and zucchini have a running

bet over who we’re going to get sick of first.

Meanwhile, we have a new bible: Vegetables From An Italian Garden. A gastronomic guide, this four-part (spring, summer, fall, winter) hunk of a book guides you through the growing seasons, inundating you with seasonal recipes. And from this fab-o book we’ve been inspired to eat Italian-style eggplant many times this week.

Like, eggplant balls. (Is that really what they’re called?) Eggplant balls are kind of frittery: they’re smooshed eggplant with breadcrumbs, egg, peccorino cheese, basil, and garlic, all packed together and pan-fried. For a variety on the theme, we covered them in a bit of mozzarella and blow-torched them.

This week’s eggplant parm – see photo above – went far better than the First Date Parm. (Although perhaps, as we’re still together, I shouldn’t knock it.) My face remains uncovered in marinara sauce.

The eggplant arrived alongside the momentous pile of:

You win this round, Eggplantapalooza. Zucchini battle soon to follow.