Last fall when root vegetables were a-boomin’ I stumbled across a Jerusalem artichoke at the farmers’ market. It’s a charming little veg with a winning spunk that looks a bit like ginger root. I’d eaten Jerusalem artichokes in its cooked form, but never seen it in its raw and was delighted to get to take one home and experiment. 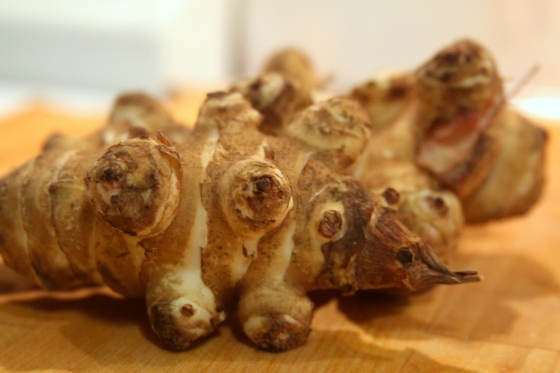 As with my purple kohlrabi incident, I knew I wanted to try and cook with my newfound artichoke, but hadn’t any idea what. So after a comedy of errors in the peeling department, Ev and I simply sautéed it in a pan until it was soft.

We added a purple (!) pepper that we’d also found at the market with this stunning lime green interior. It was slightly more bitter than your average pepper, but beautiful and tasty nonetheless. 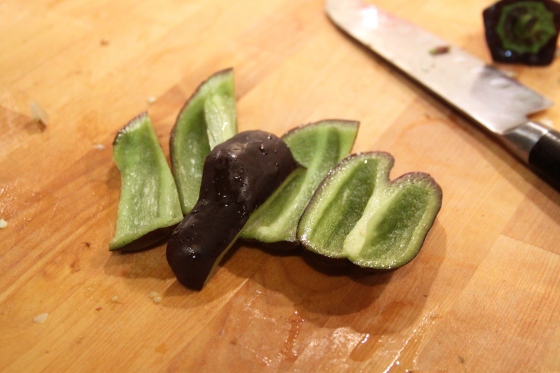 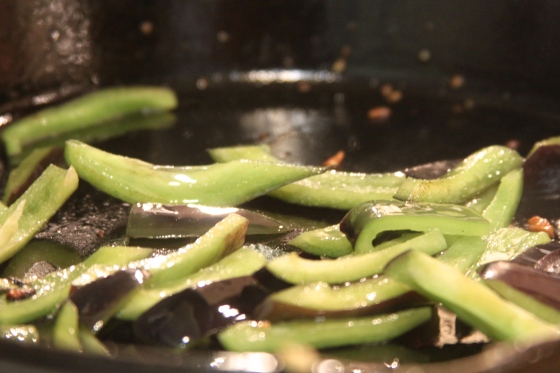 Then we plopped our artichoke and pepper on a soft taco with greens. Probably not how nature intended, but a divine little treat nonetheless. The Jerusalem artichokes were heavenly and sweet. I might not be looking forward to root season returning, but I’ll keep this little reminder in my back pocket as a beacon of hope. 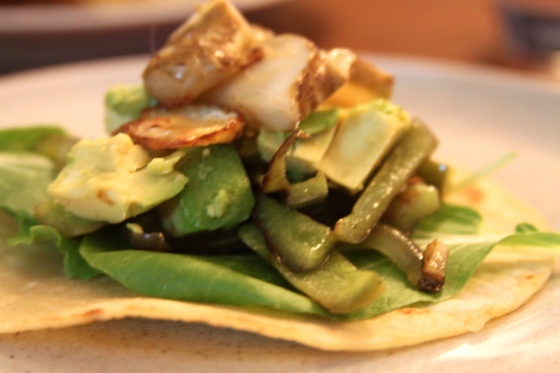 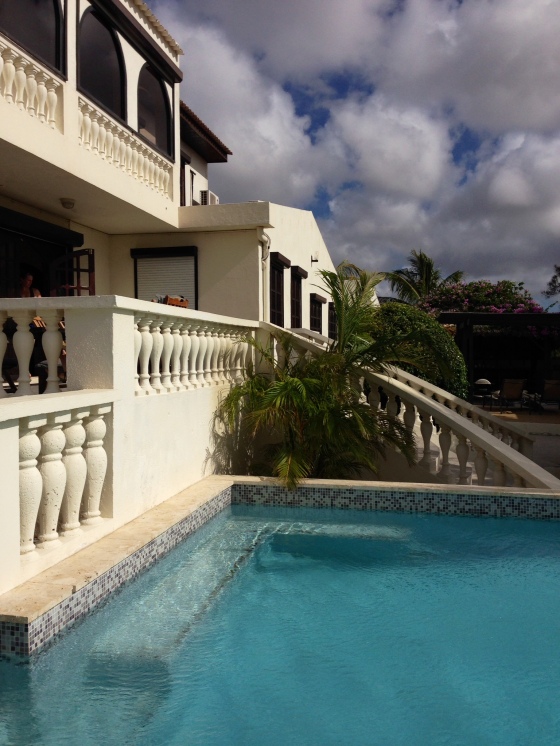 So this is the villa we stayed in (…NBD).

And in the back of this photograph if you squint really hard you might notice a tiki bar in the way back of the back patio… which looked to us like a pretty good place to enjoy a nice lunch.

The Boys’ House (as our abode was referred, comparable to The Girls’ House, although obviously there was some intermingling what with couples) spent a great majority of our downtime lazing about by the pool or breakfasting on the deck and basking in Caribbean sun. But we also took time to cook a little, including this delightful lunch consisting of a salad with beans and mango (Laurel), a pasta dish (Ben), fried plantains (I’ll credit Evan, but mostly so he feels included), and a smoothie made of mango, papaya, and orange (Brian). 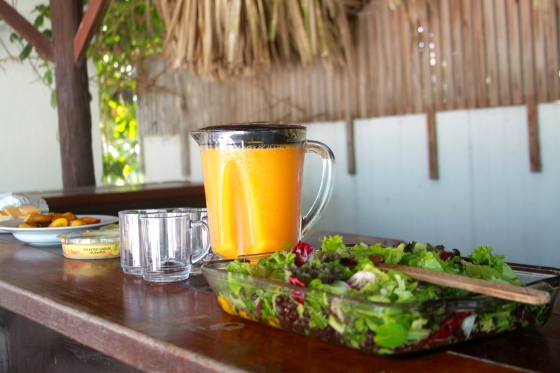 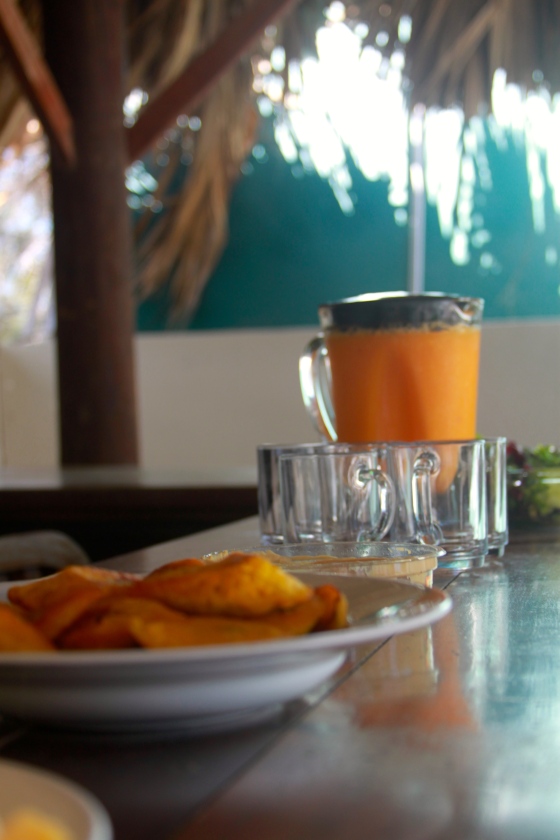 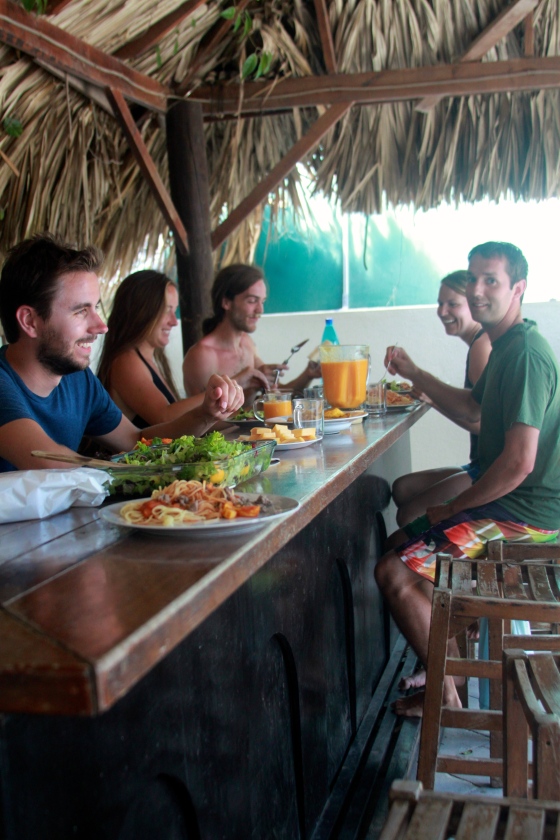 One of our favorite outings when we were in Curaçao for the wedding was visiting the marketplace!

Tropical fruit is an immense thing to behold, and it doesn’t seem to matter how efficient our system is for transporting fruits across country-lines, it just never tastes the same. We had some spectacular mangos that just fell right off the skin (not at all like from our local NYC markets), a very tasty sharp and sweet pineapple which tickled my tongue, and lots and lots of papaya. Plantains also played a delightful role in our trip and were phenomenally served with almost every meal.

Evan and I bought some cinnamon to bring home and below is a picture of our dreamy friend Ben buying cane sugar. 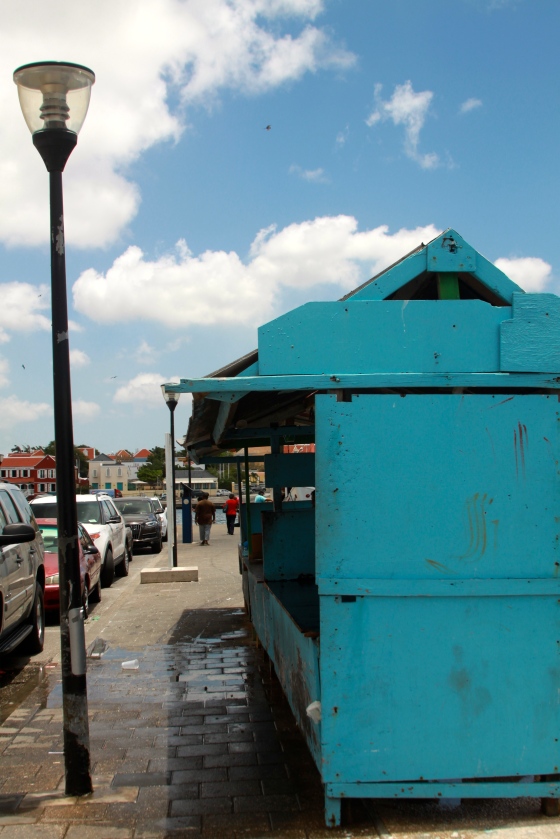 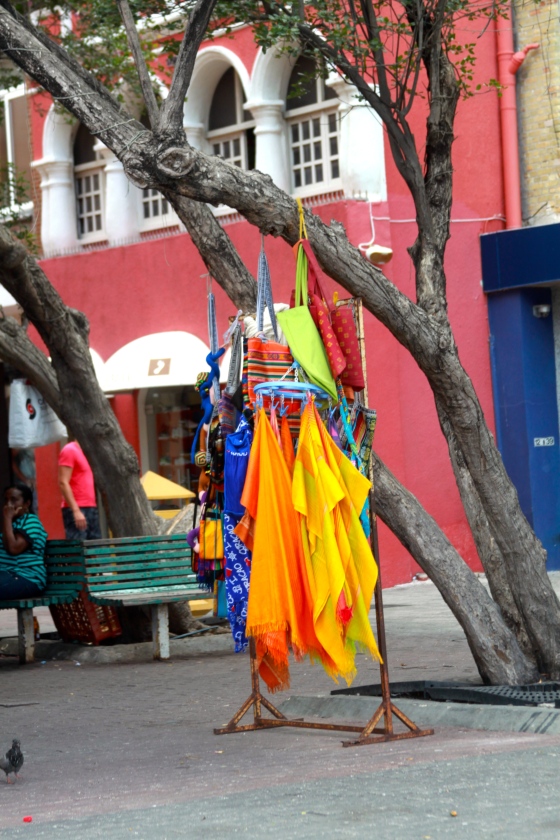 The last picture really demonstrates Curaçao’s colonization. Still owned by the Dutch, there are these derivative stretches of Amsterdam-esque streets painted colorfully in Curaçao style. They are both stunning and surreal.

Still a bit more beachy romance to come on Curaçao, and then back to the grind…

For our next ridiculous stage of Summer 2014, Evan and I went to Curaçao to celebrate our wonderful friends Sam and Shoshana’s wedding. (You may remember Sam and Shosh from dumpling making.) As one of our favorite couples of all time, this was a magical and weepy affair, and the week surrounding it was hands down the best time any group of people on Planet Earth could possibly have. We are incredibly sad to be back to real life.

While food didn’t play a hugely pivotal role in our trip, there were some exquisite catered affairs, a visit to a marketplace, the best mangos I have ever had – bar none – a fishing trip, and some clichéd beachy drinks in the mix.

Having made a promise to a pal back home that I would drink at least one “something disgusting with an umbrella,” below is a Curaçao Piña Colada, which is a piña colada with a drizzle of Blue Curaçao in it. 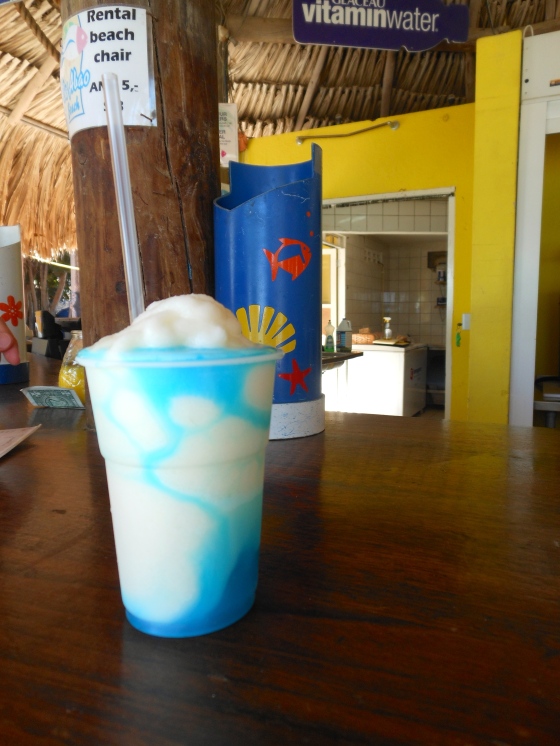 The piña colada was both piñay and colady, but I gotta say that swizzle really made the grade on the disgusting… (Sorry it was umbrella-less. I did my best.)

More to come from the island! 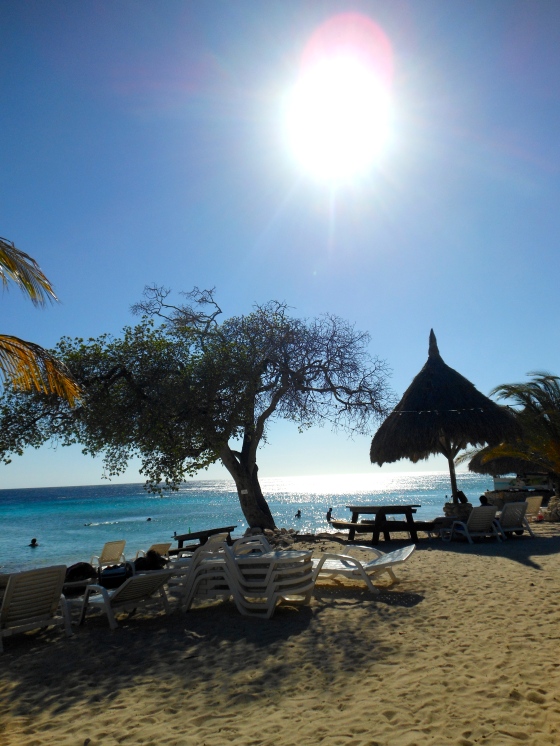 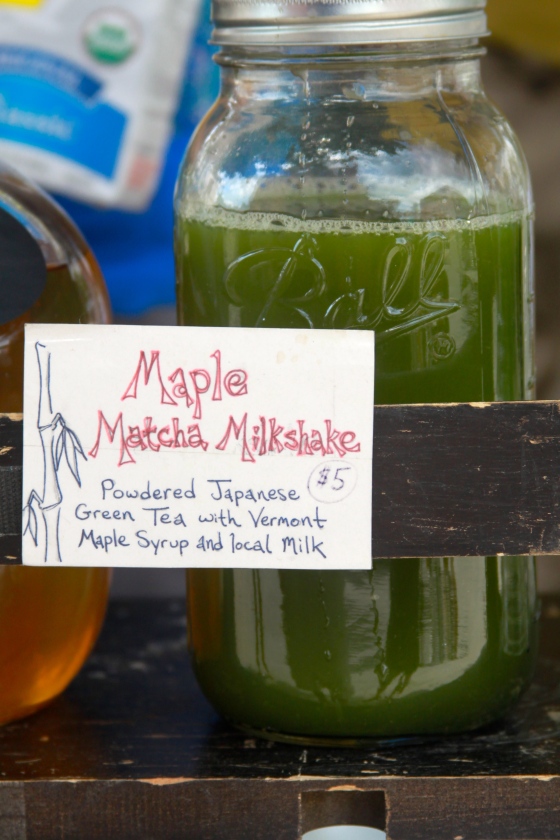 As we’ve been heavily in and out of the city lately, we lent our farm share to our lovely friends Rach and Snead who were incredibly kind enough to not only use every last drop of their produce, but to also photograph the evidence!

And so, courtesy of our beloved buddies… 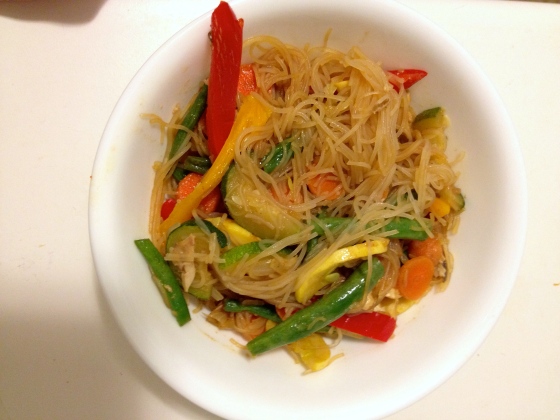 They have unnecessarily apologized for not being veggie (so I will relay their message), but such beautiful meals and inspiration! Thanks you two.

Evan’s dazzling sister Chelsea and her (equally dazzling) husband Nate invited us up to their home in Waterbury Center, Vermont for a few days this July. Among the pleasantly packed days seeing VT’s highlights, we got to help out on their farm, Moonlight Farm, for an afternoon. 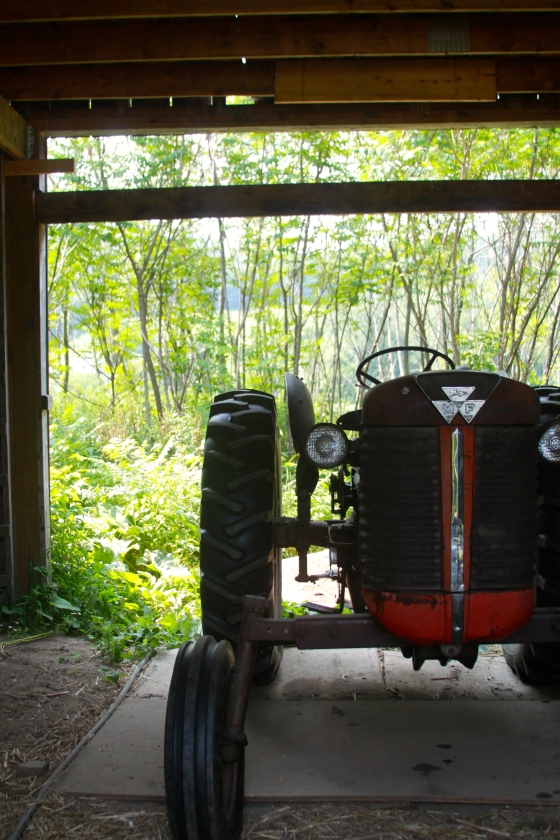 Their farm is focused on fruits, with thousands of strawberry plants, a hoop-house full of raspberries, blueberry bushes coming into maturity, and beds full of ripening melons. In addition, they grow peppers for seed and rows and rows and rows of garlic. 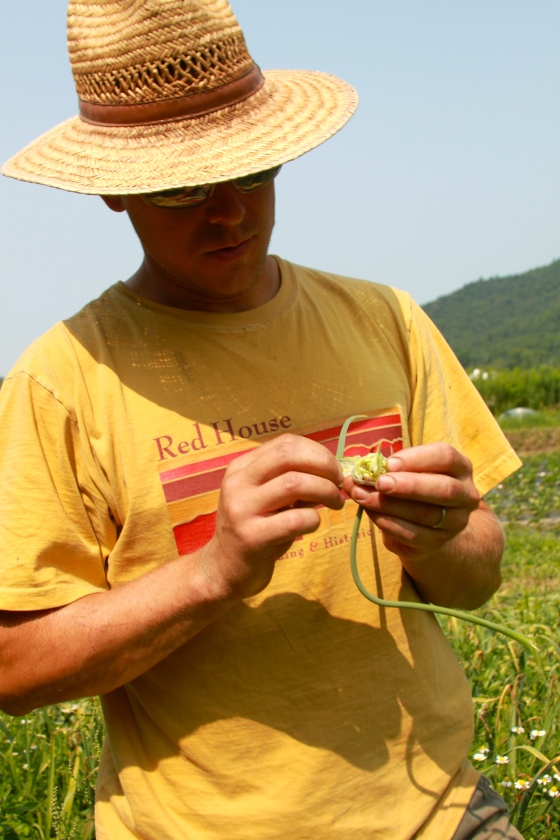 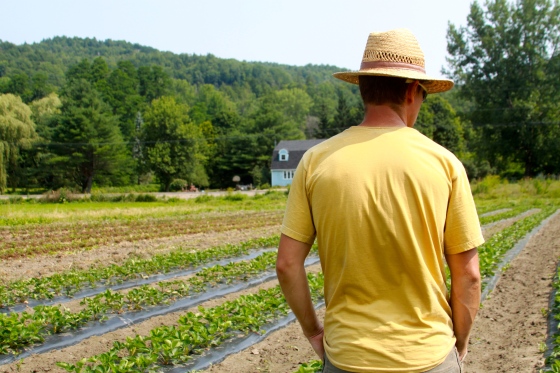 The hardneck garlic was reaching its peak when we were there, with other varieties to be ready the following week, and so our afternoon was spent pulling, clipping, stacking, and drying the wonderfully strong scented bulbs. 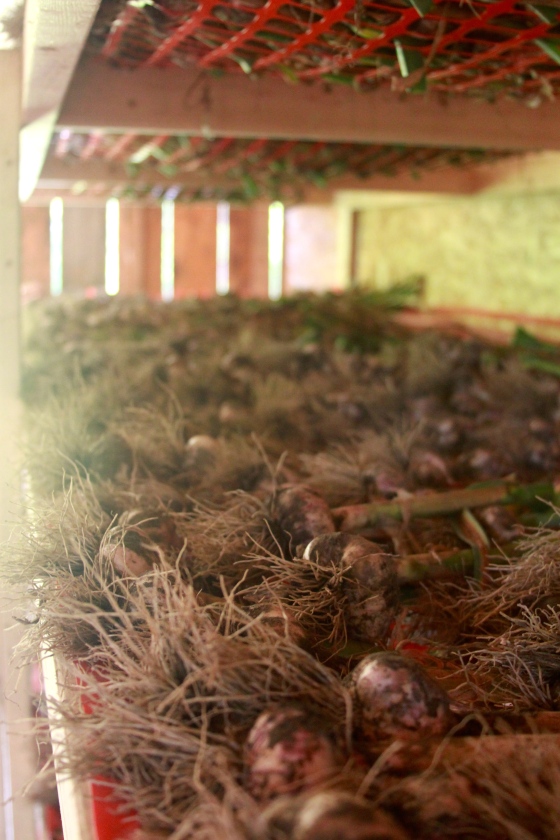 We went home that evening plastered in the aroma of garlic, smelling mightily like Italian food. It was phenomenal – so much so that I’m considering replacing my deodorant with just cloves of garlic. (I mean what can’t it overpower?) 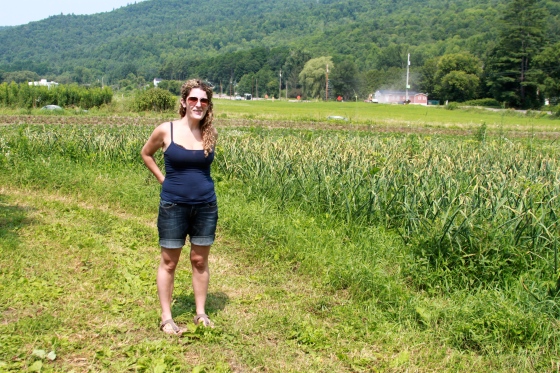 Oh. And yes, that’s me on a tractor. They let us take their awesome 1963 Massey Ferguson tractor out for a trip around the field. Proud? Yes, proud.

Our peppers are ripening slowly but surely, coming into their own fully-peppered selves.

But meanwhile, a complaint. NYC’s scent gets a particularly bum rap for a city that contains upwards of eight million peeps. But come mid-July even I can’t contest that a haze smelling distinctly of diapers, feet, and way-past-its-sell-by-date milk looms in a fog around our fair town, making almost cartoony wafting shapes above piles of trash.

And thus! Evan and I will be merely in and out of the city for the next few weeks, avoiding the Oscar the Grouch smell and seizing the opportunity to take some time off before Evan starts his PhD (whoot!  Go bunny!) and I start my Master’s in Food Studies, Nutrition and Public Health (for real, I’ll be legit).

So over the next few weeks we’ll be helping out on my sister-in-law’s farm in Vermont, visiting both sets of our folks in Northwest CT, and even going to a wedding in Curaçao! As such we will be dropping into the city every few days, instead of every-every day. Hopefully our little window bounty will survive the lack of attention – although as things are looking a leetle shabby as is, perhaps not.

But! We do have some fine looking peppers turning appropriate pepper-shades coming along, and some very exciting eggplants, which neither of us are sure when to cave and pick. Suggestions? 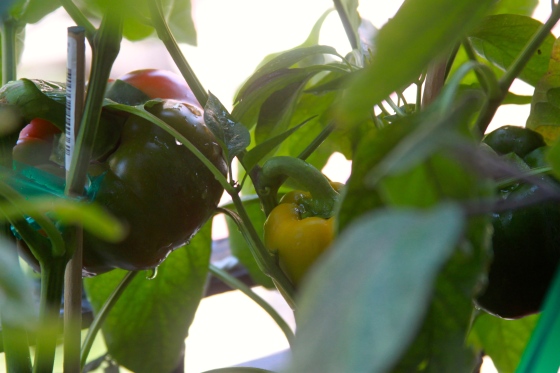 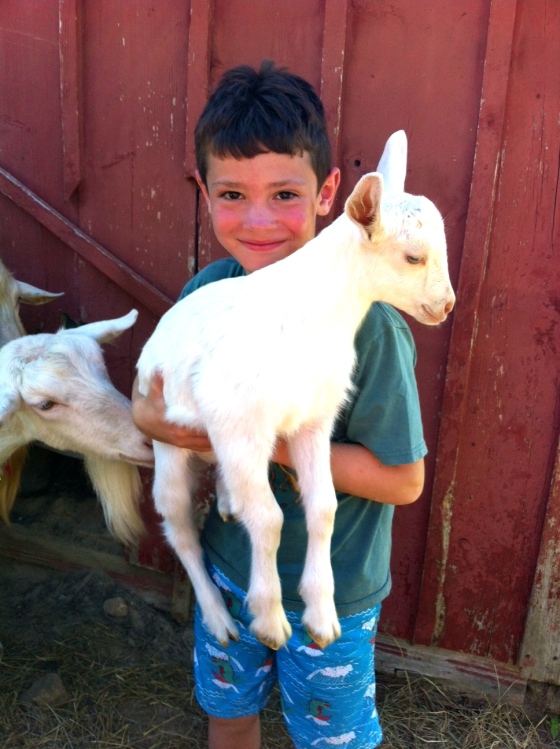 My nephew holding a goat!

Employing all aspects of my husband’s nerdiness, my dad recently purchased a copy of William Shakespeare’s Star Wars: Verily, A New Hope for him.

Written in Shakespearean voice, but telling the epic tale of  the rebellions’ fight against a totalitarian Empire – this is a play seriously worth reading. Complete with soliloquies by the formerly mute R2D2, triumphant mon

ologues by our here-to-rescue-you hero Luke, and nods to Shakespeare’s actual archetypal dramatic works, it is a clever and quirky laugh a minute.

So what could we possibly do but invite people over for a reading?

This was a fantastic affair.  Hilarious, ridiculous, and totally embarrassing. It also made a big mess for a weekday and involved a lot more prep and clean-up than expected, so for the last two acts (yes, this was a two-part event) we met in the park and made it a potluck.

Amongst this fantastic crew of readers are several vegans, and people who come over often enough to have exhausted my classics. So I did a variation on an Israeli couscous theme I make in the wintertime, usually with pomegranate and spinach. Inspiration courtesy of a post by Martha.

Israeli Couscous with Mint and Lemon 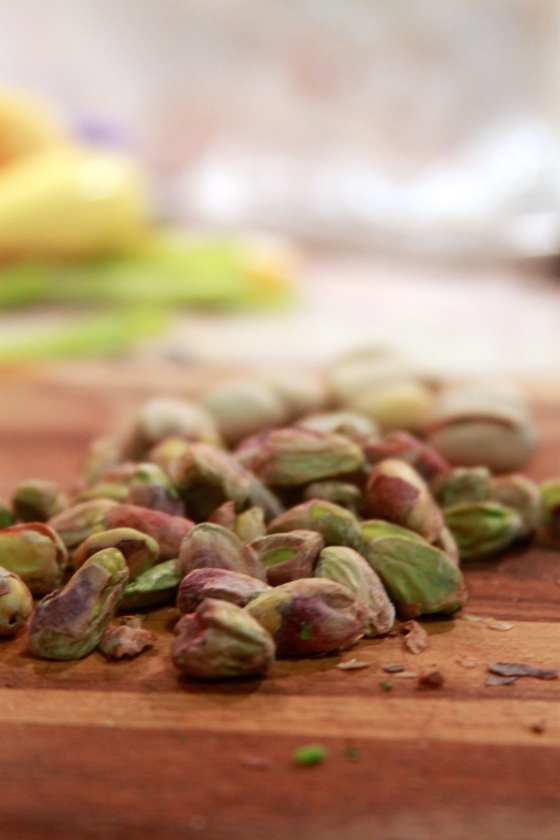 Seriously uncomplicated directions to this guy. Cook the Israeli couscous as you would pasta (although I prefer it on the al dente side, closer to four minutes). Add the other ingredients. Combine, put it in some tupperware, head to the park.

This is a game we’ll play again, definitely with other works… though it has been pointed out to me that George Lucas did not stop at Episode IV. So no doubt more potlucks, vegan/vegetarian food, loved ones and the park to come.

A Jedi craves not these things. (But I do.)