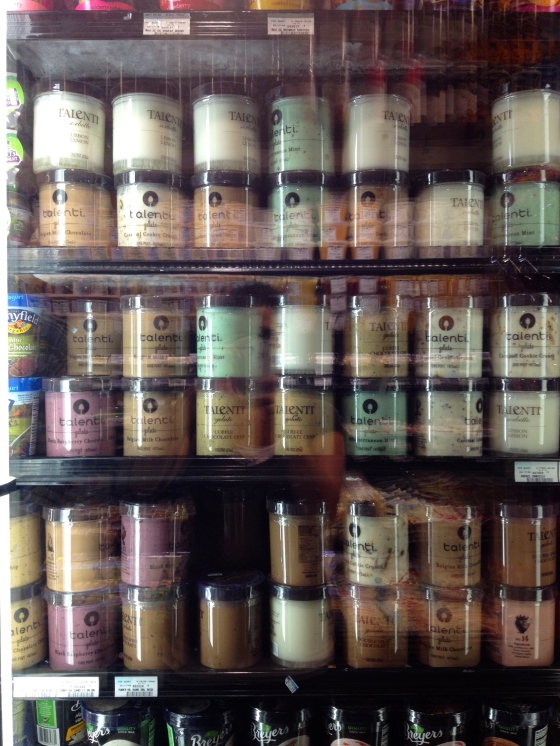 I tend to shy away from gender generalizations, but there’s something about the Y chromosome that is obsessed with Talenti Gelato. Strange men have literally high-fived me in supermarkets when I’ve stood in front of the Talenti door.  I’ve overheard the kind of enthusiasm normally reserved for sporting endeavors unabashedly tossed around in reference to said dairy product. My father has been known to pick up his phone (a rarity alone) and scream into the speaker, “There’s a Talenti sale at West Side Market, three for one!” To which I’ve had to sigh and say, “Thanks Dad, I’m still vegan… but I’ll pass the message along to Evan,” who in turn, bolts to the freezer department several blocks uptown.

The women in my life – proud members of the gender classically stereotyped as enjoying a gallon of ice cream over a good cry (I’ll just mention) – are kind of meh over the stuff, or at least vaguely confused about the incredible enthusiasm of their male partners. They sort of shrug and say, “I don’t know, I’m content enough with a carton of Haagan-Dazs or Ben and Jerry’s, but he just pounds that stuff like it’s crack.”

Whether or not you tend to think Talenti is oppressively sweet (cough – me – cough) or aren’t eating dairy (though there are “sorbettos” available), there’s one positive thing I can conclusively say. Talenti’s containers, while using arguably crazy amounts of wasteful plastic, are stupendously useful for storage.

“It’s so easy to binge on Talenti,” says my male counterpart. “It’s so smooth! If you’re going to eat a pint of Ben and Jerry’s, you’re going to need some serious spoon fortitude.”

Every time Evan conquers an additional pint of gelato, we have yet another saved container we can use to bring leftovers to work in, keep sauces stored in the fridge, or add to our bulk cabinet.  Never to buy Tupperware again.

Upon noticing that today’s post praised Talenti for its contribution to our waste management, Evan looked really hopeful and somewhat bashfully suggested, “They are really great for storage. Maybe we should start getting them by the quart…”